Another Big Year for China Venture Capital and Tech Start-ups 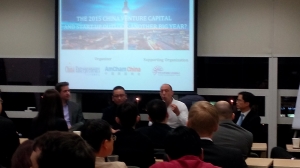 I wrote earlier about consulting with Chinese tech start up Jide and preparing them for their launch at CES on this blog.

Last night I attend a packed event about the future of China venture capital and the tech start-up community.  The event was co-organized by Beijing’s American Chamber of Commerce and the China Entrepreneurs.  Eric Schmidt (not that one) the Chairman of CEBEX Group & Founder of China Entrepreneurs moderated the star panel.

While I would have liked to see at least one woman on the panel, speakers included Taylor Lam, who is the Northern China Managing Partner of Technology, Media & Telecommunications at Deloitte China; friend Richard Robinson, Co-Founder & President, Yolu Co. Ltd and seven other start-ups; Chris Terry, Partner, Gunderson Dettmer; Richard Wang, Partner of the DFJ Dragon Fund, and Wayne Shiong, Partner, of China Growth Capital.

Most people in the tech industry, already recognize Beijing as the home to the most new software companies created outside the United States since 2003.  And according to VC investor Atomico, these new start-ups are valued at more than $1 billion.

According to China Daily, last year alone Beijing was the base for 17 of the hottest companies, including Internet security provider Qihoo 360 Technology Co, led by Skype co-founder Niklas Zennstrom.   The city also hosts the most new software developers to start in the business since 2003, a sign of the capital’s power as a magnet for the growing global industry. Given the nature of Beijing’s geography maybe we should nickname it the Silicon Bowl, although the Silicon Wall also pops to mind.

It’s great to see Alibaba and Xiaomi making international headlines and becoming household names outside China. But while many Western investors are interested in Chinese tech companies that are poised to make a huge splash this year as they push beyond their borders and invest heavily in international expansion, last night’s panelists spoke positively about new domestic start ups who are addressing real people needs in the China domestic market.  Remember, that here in China, the domestic market is 4X the size of America’s, so domestic is always going to be the first market to be conquered.

So what are some of last night’s predictions for Chinese tech start-ups in 2015?

Last night’s panelists predicted continued growth in start-ups that shake up the financial and housing sectors, just like the boom in Chinese taxi apps like Kuadi Dache, who became the fourth player in the space to raise new funding in the past month. The company announced that it has closed a $600 million financing round led by new investor SoftBank.

They also noted that last year the automotive industry in China was saturated and that will likely slow down in 2015, but that healthcare, like mobile health solutions will have strong potential.